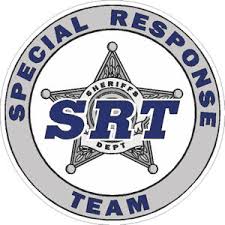 The Yancey County Sheriff’s Office Special Response Team (S.R.T.) is a tactical team comprised of eight highly trained deputies who specialize in tactical operations. The S.R.T. is utilized in situations that present a heightened risk of danger that may require special skills and equipment. These situations can include but are not limited to high risk warrant service, narcotic search warrants, hostage rescue, and barricaded suspects.

The team was originally formed in 2000 with six members but has since expanded to its current configuration. The team conducts in-house training on a monthly basis covering all aspects of tactical situations utilizing a specialized tactics instructor. Team members have also trained abroad in specialized schools that include the North Carolina State Justice Academy in Salemburg and Edneyville, Blackwater Training Group, U.S. DEA, Asheville-Buncombe Technical Community College, and Mayland Community College.

The S.R.T. is led by a lieutenant who acts as both the team leader and a team member. The team also uses an additional member who acts as the assistant team leader. The remaining members fulfill a variety of team positions to include point man, shield man, sniper, K-9, and rear guard.